Historic Hop Kiln is a Treasure

I had the pleasure of visiting the Hop Kiln Winery on the Russian River last week and was so impressed I felt you should know about it. This is an actual hop drying kiln built in 1905 near the Russian River, and has been part of Sonoma County history since. It operated as a hop kiln from 1905 to 1940 and is located at 6050 Westside Road, about six miles south of Healdsburg. After the hop kiln closed down, which was used for drying hops grown for beer, the 240-acre ranch became a sheep ranch.

In 1960, Dr. Martin Griffin purchased the ranch and began restoring the hop kiln with the help of friends and a barn builder. At this point, he decided to turn it into a winery to finance the project. This magnificent building with three towers 120-feet high, with 30-ft. high fieldstone sides saved itself. There were already grapes growing on the property that were about a hundred years old. These grapes, Petite Sirah and Zinfandel were used for making wine for the workers. The attention to detail and accuracy used by Dr. Griffin in the restoration was recognized by National Historic Trust by adding the building to its registry. Dr. Griffin was so intrigued by the variety of grapes that he studied winemaking techniques used in Tuscany, Sicily and Germany, so he could produce the finest of wines, and champagne. His theory was that wine must taste good at every stage of its development. Having had bio-chemical training in medical school he became a member of the California Wine Institute and helped develop high standards for winemaking.

The tasting room at Hop Kiln Winery is probably the most captivating tasting room I have ever seen. I can easily see why it has been voted one of The Best Ten Tasting Rooms in Sonoma County

In addition to displaying their fine wines they feature a wide range of locally produced deli-items, the art of local artists, and a photo display of the hop kiln industry in its heyday. And to top it all off, the view is breathtaking. It features a lake stocked with catfish, trout, and attracts flights of migratory ducks, great blue herons and an occasional otter from the Russian River.

Dr. Griffin, author of Saving the Marin-Sonoma Coast, has long been a strong believer in protecting the environment, especially west Marin and the Russian River. He has worked hard to maintain a safe and special place for the wildlife.

In 1973 Griffin found a deserted 1873 Italianate Victorian house in Fulton and moved it twenty miles across the river to his property, not an easy task. With the help of a barn builder, he cut the two-story house into four pieces with a chain saw and put it back together again. The county was so impressed they made it a County Historic Landmark. The winery is also a California Historic Landmark, and Congress registered it with the National Historic Trust. The vineyards are part of the Historic Agricultural District. In 1997 Marty and his wife Joyce, received the Healdsburg Museum and Historical Society’s award for historic preservation of an industrial enterprise.

For nearly 40 years the Griffin Villa, with its three grand porches overlooking the valley and Mayacamas mountains and Mt. St. Helena, was the scene of numerous parties, civic and political fundraisers, concerts, dances, outdoor musicals, family and friend’s weddings, canoe races and barbecues, and visits from famous chefs.

Hollywood filmed five movies at the ranch, of which the most memorable is The Magic of Lassie, a musical with Jimmy Stewart, Stephanie Zimbalist, and Mickey Rooney. Fred McMurray visited from his nearby ranch. The filming took three months with three Lassies. This movie is shown worldwide.

After Marty turned 83 in 2003, he decided to put the winery up for sale after placing about 70-acres along the river and upper Griffin Creek into a Riparian Preserve that will be protected forever. Griffin and the new owners have created a creekside preserve of 26 acres, called Gina’s Orchard, managed by the Episcopal Bishop’s Ranch as a memorial to Griffin’s granddaughter who lost her battle with leukemia at age fifteen.

Read more about these efforts on behalf of the Russian River in his book, Saving the Marin-Sonoma Coast, (Part Four). 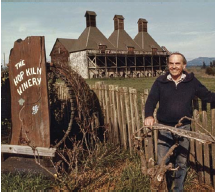