Hiking the John Muir Trail In 1938

Following is a letter Marty wrote to his family describing his adventures with Wilbur Twining, hiking the John Muir Trail, the year the Trail was completed, when Marty and Wilbur were 18 years old.

I guess that Dad has sent or showed you the publicity Wilbur and I got in the Post-enquirer. I sure was surprised to see it, as I was at scout camp when it was published.

Will’s dad took us to Huntington Lake, and we thumbed a ride to Florence Lake (26 mi.). We started from there with 70 lbs. packs. Boy, after we had hiked about 4 miles we just dropped in our tracks. Both of our shoulders were raw. Gee, in order to get our packs on, both of us would drag one pack to a rock, and then I would climb into it, then Wilbur would pull me up and we would repeat the procedure.

The next day we came to the last outpost, a ranger’s cabin. He wouldn’t let us go because he said the trip was too dangerous. He said our parents must not think much of us to let us attempt such a trip. He claimed we’d never get over the Muir Pass. So we went back down the trail a half-mile, and then turned around and went around the darned old Ranger.

When we reached Evolution basin, which is supposedly the most scenic of the Sierras, we found all the lakes frozen over and the snow was about 10 ft. deep. We would make about 4 miles a day over the snow. We saved time by crossing the lakes. We tied our climbing ropes around us and as we had ice axes we were comparatively safe. Once Wilbur jumped over an air hole and the ice broke and started to tip over backwards with him on it. He jumped back as far as he could and just barely lit on the edge of the ice. Boy were we scared. I stepped into an air hole and went into my thighs. We had to stop for two hours to dry out.

That night we had to sleep on top of a rock, because we couldn’t find any ground that didn’t have snow on it. We ate peanuts for dinner and breakfast. The next day we planned to go over Muir Pass, which is the highest pass in the Sierra, almost 13,000 ft. We started at six in the morning up a ledge that looked like the trail (we hadn’t seen any trail for 3 days because of the snow.) Anyway, we went right straight up a cliff for almost 1000 ft. Boy were we scared. We had the rope tied around both of us, and Wilbur would go the length of the rope and dig in with both of the ice axes, then I’d come up to him and we’d repeat the procedure. It took us from 6 in the morning till 7:30 in the evening to get up on the ridge. We were darn near dead, but boy what a view. We could see the whole length of the Sierras, and right beside us was Mt. Whitney, and all of the other highest peaks of the U.S. On top of the ridge there was more snow. We ploughed through it till we reached the top of the pass where the Sierra Club has erected a hut to the memory of John Muir. Boy, we rolled out our bags on the stone floor inside and went to bed with all our clothes on. We had been in the glare of the sun all day long and were sure sunburned. I had a hat on, a bandana around my neck and cheeks, dark glasses coated with charcoal, grease paint all over my hands and arms, and zinc oxide on my face, and still my face was just a mass of blisters, the inside of my mouth had blisters in it, my tongue was sure a mess. It was swollen. The inside of my ears were blistered and I couldn’t see out of my eyes. My hands were all blistered too. Wilbur wasn’t quite as bad, but he was blistered too. We slept all that night and the next day till six o’clock in the evening. When we woke we saw a woodchuck sticking his nose in the door. Boy, we jumped for him, but he beat it off across the snow. About ten minutes later he came back. We had woodchuck for dinner, but he sure was tough.

It was a full moon that night, and the moonlight sure was pretty on the snow, so we decided to climb the next day the highest peak in the U.S. by moonlight (Mt. Sill). It took us about 2-1/2 hours to climb it with rope and axes. But, gee, what a sight when we got up there (14,224 feet). It was as bright as day. We could see Santa Barbara, Los Angeles, the mountains surrounding Reno. There was fog around the Bay, so we couldn’t see Oakland. We got some swell pictures.

We intended to go over Mather Pass and climb Whitney, but the pass was even in worse condition than Muir Pass, so we decided not to try it. This meant that we’d have to get out of the Sierras via Bishop, Reno, Sacramento and Oakland. So we started down the Kings River to the trail that turned off to Bishop, but on the way we decided to go the 30 miles down the river to the Kings River highway and then to Fresno. After we had gone 22 miles, the trail branched off to Shaver Lake (36 miles). We hadn’t planned on this, so we went on down the river 8 miles to the highway, but it took us one hour to go 500 yards, through the dense underbrush, on that 500 yards we avoided 2 four-foot rattlers, and 7 five-foot rattlers. We were disgusted so we turned around and started out for Shaver Lake. Boy, was that a terrible hike. We saw one more big rattler and finally arrived at a fire lookout station. The ranger fed us well and slept in his bed that night. The next day we had 28 miles to go if we wanted to get to Oakland by Saturday. We practically ran it. We sure were in good shape. We arrived at a place called Dinkey, near Shaver, where the district ranger lived. We told him all about our hike and what bridges were out. He sure was proud of us and he said that in 25 years time no other person had been through as early as us. He gave us dinner and we went to bed.

Saturday morning we got up early and hung around some people’s camp till they invited us to breakfast. Wilbur ate 7 eggs. I ate 5. We ate a quart of peaches, 2 quarts of milk, 1 pot of chocolate, 1-1/2 lb of bacon (we furnished), 1 loaf of bread, and 1 pint of marmalade – (were they disgusted) – then we bought a watermelon and finished that. We hitch hiked to Shaver, then got a ride to Fresno. We took the bus to Oakland. Gee, was that a trip. We have our next one all planned – to British Columbia.

I forgot to say that the bridge across the Middle Fork of the Kings River was out, and Wilbur and I were contemplating turning back to Huntington, but there was one cable across the river, so Wilbur tied our climbing rope around himself and looped it around the cable and tied it to a tree, then he swung hand over hand across the gorge, with the water going over a falls about 50-feet high, 100 yards down the river, and the water was going under the bridge at a 45 degree slope, 80 feet below. He made it and I pulled the rope back. It was about 40 feet across and the rope barely made it. Then I did it. When I got about in the middle, the side bag swung around and hit me in the face. I just grabbed it in time, or we would have lost all our camera stuff. When I got over my hands were blistered and burning and Wilbur had big cuts in his. We sat on the other bank and shook for an hour we were so scared. 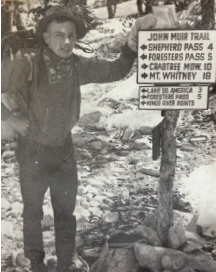 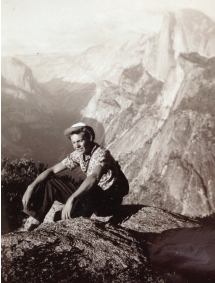 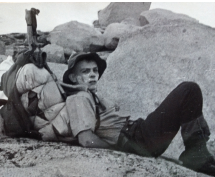 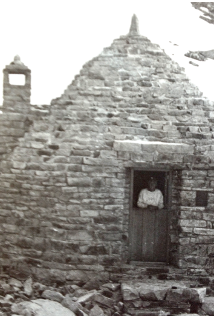